A huge field of antennas at the border of Yekaterinburg and Verkhnyaya Pyshma, next to Veyer – is a former “Radiocentre № 3”. It’s an unusual and mysterious place for a walk.

The Radiocentre № 3 was built in the beginning of the 1950s. There is a legend that the radio station was evacuated and transported from Moscow suburbs to Sverdlovsk (Soviet name of Yekaterinburg) during the 2d World War, but it’s just a legend.

The origin of the legend comes from the allegation that during the War in strict secrecy a famous radio announcer, “the voice of the country” and Gitler’s enemy №1 Yuri Levitan was evacuated from Moscow to Sverdlovsk.

From the basement in 2, Radistcheva street, where he was working, cables had been pulled to the long-wave radio station RV-5 (PB-5) at lake Shartash, and that’s where the summaries of Sovinformburo (Soviet Information Bureau) were broadcasted from. All that became clear many years later, that’s why there is still a lot of rumour and speculation on the Levitan’s presence in Sverdlovsk.

And the real meaning of the radio station at Veyer is also quite unclear. If you ask local residents of Yekaterinburg what are the towers at Veyer for they usually answer: “To jam broadcast of “Voice of America”. It is said that during the war the towers were blocking radio communication between the fascist line Tokyo-Berlin and jamming anti-Soviet broadcast of German radio stations who tried to spread panic propagating rumours. Although you can guess that it is not true, since the station was built only after the war.

During the Iron Curtain the radio station was jamming the signal from the West. One of the residents of Yekaterinburg, Natalia, remembers that when she and her family moved to Sverdlovsk from Kaliningrad in 1979, she was really upset being unable to listen to her favourite western radio stations. You could pick them up somewhere more to the west of Sverdlovsk but in the city or more to the east you couldn’t.

According to another version the station at Moskovskaya Gorka was responsible for jamming and the radio centre at Veyer was propagating pro-Soviet ideas to Asia and Africa, in opposition to the anti-Soviet broadcast of “Svoboda” and “Voice of America”.

It is hard to say what is true and what is false, but it is known that the radio station at Veyer worked in HF range for China and for far-end “radio countermeasures” which means that they jammed signals anyway.

Apart from the towers there are some small rhombic horizontal double antennas. 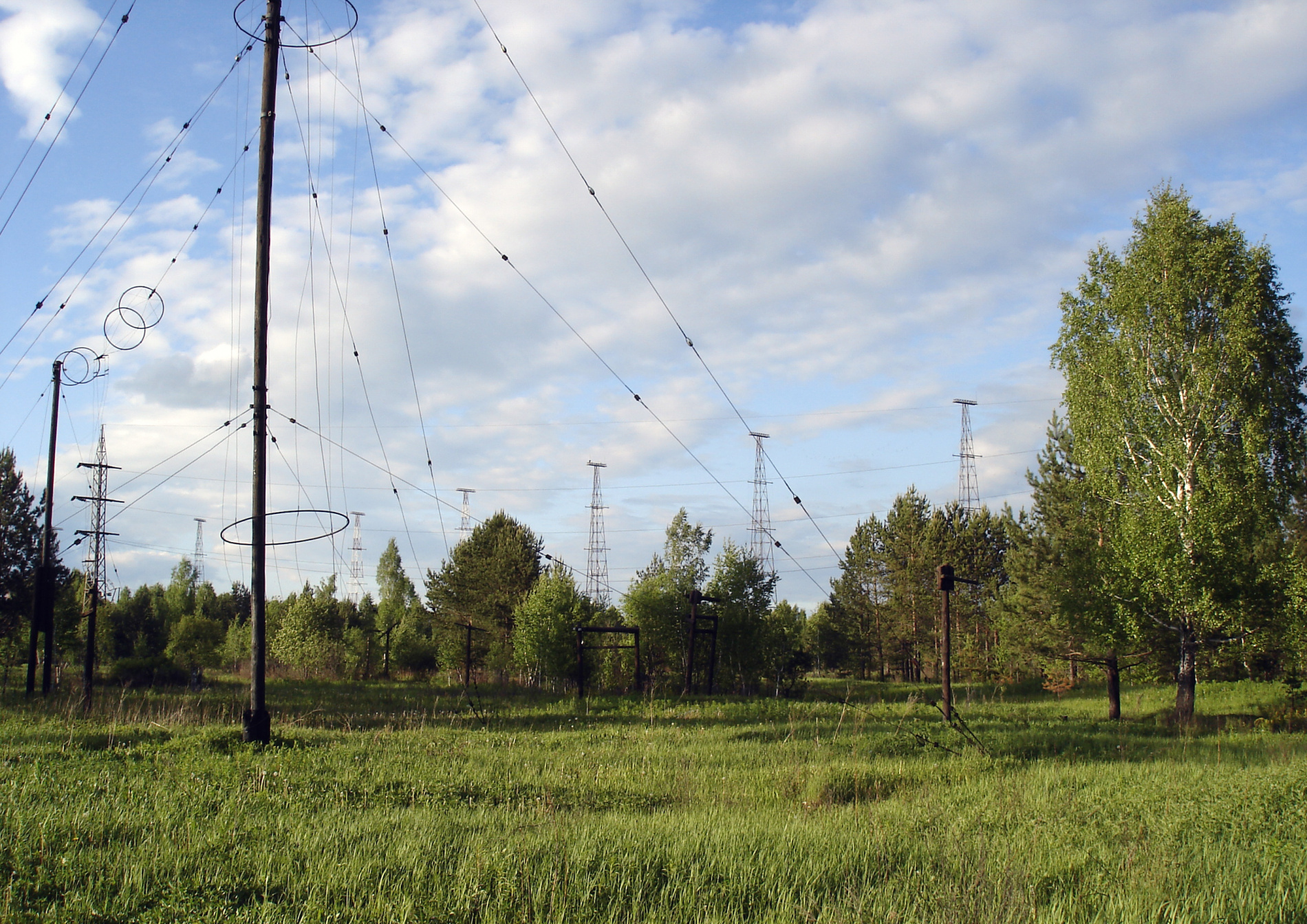 All in all there are about twenty towers. Between them dipoles, which look like lace or little “dreamcatchers”, are pulled. Nowadays almost all of them are broken and they are clanging forebodingly in the wind.

Two lines of the towers frame a vast territory; inside there’s a beautiful pine forest. In the middle of the forest there is a former building of the radio station and two technical buildings which are situated symmetrically opposite each other. It was there where the long-wave transmitters working in HF range used to be.

Every technical building is provided with two pools to cool anodes of radio valves. It’s said that children used to love swimming there because the water was always warm. The kids constantly broke sprayers which made the staff of the radio station greatly annoyed.

Nearby there are some metallic trusses with roofs, fans, gears and dipoles which extend in different directions. We assumed that those trusses were used for tuning, though we cannot be sure.

At the territory everything is preserved as it was in the 1950s. All the buildings, though the towers don’t function, are inhabited. You can find there a water tower, an automobile service centre, a saw mill. On the gates of the technical buildings there are plates: Controlled Area. It is also rumoured that from time to time you can see some cars with black licence plate numbers there. Nowadays the territory of the field is safe, there isn’t any hazardous radiation. One can find lots of object of unknown for outsiders purpose – some clearings with antennas, bunkers, queer wooden constructions. In the forest, not far from the security desk there is a strange object which looks like a hexahedral cardboard birdhouse with small round windows. One can think it is something like an analogue computer of the Soviet period or a remote controller with a timer. You can see some communication lines near it. But in fact it is an antenna switch that had to maintain the operation of the transmitter with larger number of antennas pointed in different directions.

Below – lots of pictures with comments.


By way of illustration here is the location of all the objects on the map. A yellow line indicates towers of 110 meters high, the green one – 75 meters high.

Every tower is equipped with a ladder. Several years ago everyone could climb them but now the ladders are sawed up to the 1st floor. Adrenaline addicts and roofers keep climbing them but at least kids, drunk people and all who aren’t ready - don’t anymore. 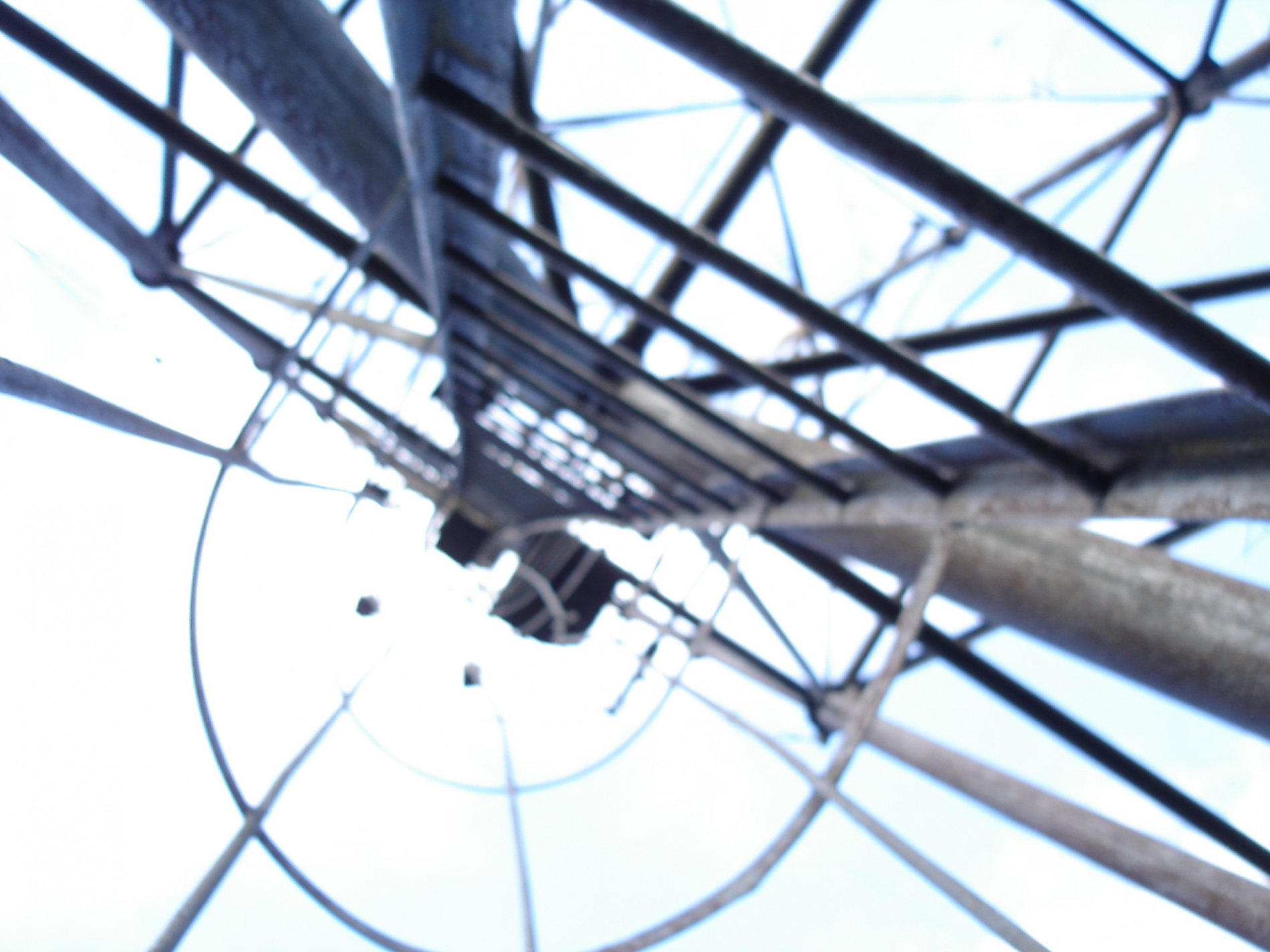 In the video extreme sportsman Maxim Kagin is walking on the taunt cord between two towers. He managed to walk only 25 meters of 57.

Some towers are being used for cellular transmission, some are abandoned. It is possible that they will be demolished soon and a new district will be build there. Or a TV tower – there is some rumour about it too.

Next to the field of antennas you can find collective gardens with meaningful names “Operator”, “Signal”, and the bus stop “Radio station”.

By car: go to Veyer or the Northern cemetery.

And in the end – a picturesque general view. You can see only half of the towers in the photo; to shoot all of them is possible only from an air view.